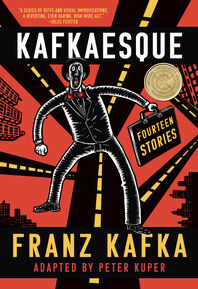 Long fascinated with the work of Franz Kafka, Peter Kuper began illustrating his stories in 1988. Initially drawn to the master’s dark humour, Kuper adapted the stories over the years to plumb their deeper truths. Working from new translations of the classic texts, Kuper has reimagined these iconic stories for the twenty-first century, using setting and perspective to comment on contemporary issues.

Long-time lovers of Kafka will appreciate Kuper’s innovative interpretations, while Kafka novices will discover a haunting introduction to some of the great writer’s most beguiling stories. Kafkaesque stands somewhere between adaptation and wholly original creation, going beyond a simple illustration of Kafka’s words to become a stunning work of art.

"For tips on graphic novel adaptations, publishers would be well-served to look at Peter Kuper's Kafkaesque. The renderings of fourteen Franz Kafka short fictions remain true, but not slavishly devoted, to the originals and the final product gives us new perspectives on classic stories. It certainly helps that Kafka's work is opaque and ripe for reinterpretation, but it is Kuper's art that makes it so fresh." — Times Literary Supplement

"Kafkaesque is a stout, enchanting exploration of Kafka’s work. Illuminating his curious character with such incomparable art galvanises the comic’s content, making each individual story land with dramatic flair... It's not only a startlingly robust testament to the power of Kafka’s literary prowess, but also a splendid showcase for Kuper’s manic artwork." — Starburst

"… fans of enigmatic pessimism can allow themselves a shudder of delight." — Strong Words

"Brilliant... The Kafkaesque humor is intact, even enhanced." — The Wall Street Journal