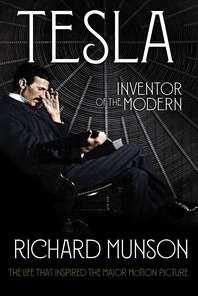 Though Tesla’s inventions transformed our world, his true originality is shown in the visionary ambitions he failed to achieve.

Nikola Tesla, a Serbian-American, invented the radio, the induction motor, the neon lamp and the remote control. His breakthrough came in alternating current, which pitted him against Thomas Edison’s direct current empire and bitter patent battles ensued. But Tesla’s technology was superior and he prevailed. He had no business sense, could not capitalise on this success and his most advanced ideas were unrecognised for decades.

Tesla’s personal life was magnificently bizarre. Strikingly handsome, he was germophobic and never shook hands. He required nine napkins when he sat down to dinner. In later years he ate only white food and conversed with the pigeons in Bryant Park. This authoritative and highly readable biography takes account of all phases of this remarkable life.

“Munson makes vivid the genius’s eventful life, from his mother’s inspirational labour-saving inventions to his psychological complexity — and his estimable belief that “technology should transcend the marketplace”.” — Nature

“Munson tells the story engagingly. He manages to explain the important concepts and technical details clearly while keeping extraneous detail to a minimum.” — Times Literary Supplement

“Richard Munson’s Tesla: Inventor of the Modern gives us a detailed and vivid glimpse of the competitive world of electrical innovation at the end of the 19th century, and emphasises the duality of his subject... most interesting and often amusing book...” — The Spectator

“... a superbly researched, entertaining and often saddening study of a man who gave the world so much yet took so little... It can only be hoped that Munson's excellent insight will finally reveal the truth behind this marvellous maverick to the world.” — All About History