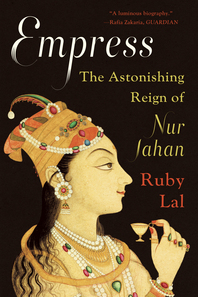 Four centuries ago, a Muslim woman ruled an empire. Her legend still lives, but her story was lost—until now.

In 1611, thirty-four-year-old Nur Jahan, daughter of a Persian noble and widow of a subversive official, became the twentieth and favourite wife of the Emperor Jahangir who ruled the Mughal Empire. An astute politician as well as a devoted partner, she issued imperial orders; coins of the realm bore her name. When Jahangir was imprisoned by a rebellious nobleman, the Empress led troops into battle and rescued him.

The only woman to acquire the stature of empress in her male-dominated world, Nur was also a talented dress designer and innovative architect whose work inspired her stepson’s Taj Mahal. Nur’s confident assertion of talent and power is revelatory; it far exceeded the authority of her female contemporaries, including Elizabeth I. Here, she finally receives her due in a deeply researched and evocative biography.

“Also outstanding is Ruby Lal’s Empress: The Astonishing Reign of Nur Jahan, the story of the first and only female ruler of the Mughal Empire.” — Simon Heffer, History Books of the Year 2018, The Telegraph

“A luminous biography... It is a captivating account, its depth of detail recreating a world whose constraints of lineage would seem to preclude the advance of an unknown, self-made, widowed queen... Lal’s book is an act of feminist historiography.” — Rafia Zakaria, The Guardian

“Lal’s intriguing biography, with its chronology of her relatively swift rise to power and even swifter descent, restores Nur Jahan to her full splendour.” — 10 Books to Read in July, BBC Culture

“... meticulous book... In filling in the details of Nur Jahan's life, Ms Lal has not only written a revisionist feminist biography; she has also provided a vivid picture of the Mughal court, with its luxuries, beauties, intrigues and horrors.” — The Economist

“Ruby Lal, an Indian historian now teaching in America, faces exactly these challenges in writing the biography of the Mughal empress Nur Jahan, a near contemporary of Elizabeth I. That she succeeds so admirably with a relative lack of authentic material is a tribute to her dexterity as a writer. She enlivens the mostly austere historical record by including (with due caveats) the many entertaining legends that have accrued around Nur Jahan over the centuries. In so doing she not only paints an absorbing portrait of a remarkable woman, but also offers a stylish reconstruction of a fascinating slice of Mughal life.” — The Telegraph

“Lal has done a service to readers interested in the Mughal period and the many forgotten or poorly remembered women of Indian history.” — Vikas Bajaj, The New York Times Book Review

“Lal... does a marvellous job of piecing together the scant evidence about her heroine's life.” — The Irish Independent