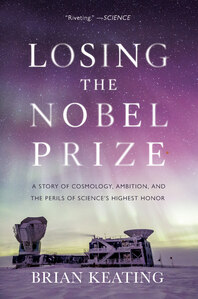 The inside story of a quest to unlock one of cosmology’s biggest mysteries, derailed by the lure of the Nobel Prize.

In Losing the Nobel Prize, cosmologist and inventor of the BICEP (Background Imaging of Cosmic Extragalactic Polarization) experiment Brian Keating tells the inside story of BICEP2’s mesmerising discovery and the scientific drama that ensued. In an adventure story that spans the globe, Keating takes us on a personal journey of revelation and discovery, bringing to vivid life the highly competitive, take-no-prisoners, publish-or-perish world of modern science. Along the way, he provocatively argues that the Nobel Prize, instead of advancing scientific progress, may actually hamper it, encouraging speed and greed while punishing collaboration and bold innovation.

“[Keating] is a deft writer, interweaving the science with personal musings.” — Nature

“By losing the Nobel Prize, Keating has led us to an even greater victory: the recognition that there are more important things in this Universe… than the fleeting glory of an earthly award.” — Forbes

“A riveting account of the rise and fall of the seeming confirmation of the cosmological theory of inflation... Keating offers vivid profiles of the personalities involved in shaping our modern view of the universe.” — Science

“A compelling personal memoir, a fascinating history of cosmology, and an interesting firsthand account of a dramatic scientific adventure.” — Physics Today