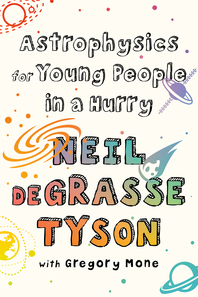 America’s most celebrated astrophysicist invites young readers to explore the mysteries of the universe.

Neil deGrasse Tyson has become one of the most recognisable and respected figures in science. In this adaptation of his “genuinely accessible” (Summer Reading 2017, The Sunday Times) The New York Times number one bestseller Astrophysics for People in a Hurry (ISBN 978 0 393 60939 4), Tyson has—for the first time—served up the universe in a handy, portable package designed specifically for young readers. From the difference between a star and a supernova to what matter and dark matter really are, Astrophysics for Young People in a Hurry will turn young people into budding experts on the fundamental rules and unknowns of our universe. Along the way, Tyson’s characteristic wit ensures a journey packed with fun.

“Tyson is admirably straightforward in his descriptions and doesn’t lapse into being condescending or patronising and I especially like the way he’s happy to say that there are things we just don’t know and phenomena we don’t understand.” — The Letterpress Project

“The authors deliver an informative guide to modern astronomy, and most scientific terms or principles are adequately explained in easy-to-follow but not patronising language. There are useful discussions on topics such as Big Bang cosmology, relativity, extraterrestrial life, dark matter, dark energy and black holes.” — BBC Sky at Night