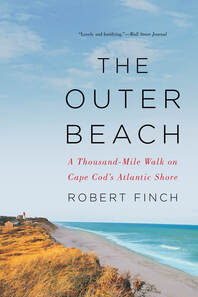 A poignant, candid chronicle of a beloved nature writer’s fifty-year relationship with an iconic American landscape.

Those who have encountered Cape Cod know that it is a singular place. In The Outer Beach, Robert Finch weaves together his collected writings from more than fifty years and more than a thousand miles of walking along Cape Cod’s Atlantic coast to create a poignant, candid chronicle of an iconic landscape.

“Lovely and fortifying... Geologists estimate that Cape Cod will disappear in around 6,000 years... Until it goes, may there continue to be writers as good as Mr. Finch to commemorate it.” — Sam Sacks, The Wall Street Journal

“[Finch] is a keen and passionate observer... [He] artfully conveys what is, at heart, so stirring about the beach: how its beauty and magisterial power cause us to ponder the larger things in life.” — The New York Times Book Review