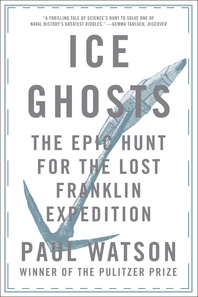 The true story of the greatest mystery of Arctic exploration—and the rare mix of marine science and Inuit knowledge that led to the shipwreck’s recent discovery.

Ice Ghosts weaves together the epic story of the Lost Franklin Expedition of 1845—whose two ships and crew of 129 were lost to the Arctic ice—with the tale of the incredible discovery of the flagship’s wreck in 2014. Paul Watson, who was on the icebreaker that led the discovery expedition, tells a fast-paced historical adventure story: Sir John Franklin and the crew of the HMS Erebus and Terror setting off in search of the fabled Northwest Passage, the hazards they encountered and the reasons they were forced to abandon ship hundreds of miles from the nearest outpost of civilization, and the decades of searching that exposed rumours of cannibalism and a few scattered papers and bones—until a combination of Inuit lore and the latest science yielded a discovery for the ages.

“... his [Paul Watson's] account of the final uncovering of Erebus and Terror wrecks is riveting...” — The Observer

“... Watson has produced a primer for the whole sorry saga and given us a comprehensive account of a gripping story: one which, like that of Shackleton, will engross readers until the next Ice Age.” — Sara Wheeler, Times Literary Supplement

“... Paul Watson’s Ice Ghosts provides a gripping account of the uncovering of the wrecks of Erebus and Terror, the lost ships of John Franklin’s doomed 19th -century expedition to sail the North west Passage.” — Science Books of the Year 2017, The Observer

“This fascinating book weaves together the story of the lost Franklin Expedition of 1845 and the remarkable people and events that led to the shipwreck’s discovery in 2014.” — Choice