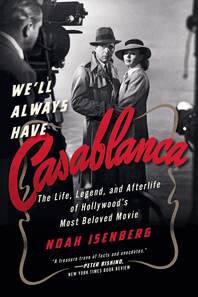 “Even the die-hardest Casablanca fan will find in this delightful book new ways to love the movie they were certain they could never love more.” —Sam Wasson, best-selling author of Fifth Avenue, 5 A.M.

Casablanca is “not one movie,” Umberto Eco once quipped; “it is ‘movies.’” Film historian Noah Isenberg’s We’ll Always Have Casablanca offers a rich account of the film’s origins, the myths and realities behind its production, and the reasons it remains so revered today, over seventy-five years after its premiere.

“We'll Always Have Casablanca is a hugely readable and entertaining look at how Casablanca came to be, and how it came to be such an indelible part of American pop culture.” — Chris Foran, Milwaukee Journal Sentinel

“Combining trenchant analysis of the film’s poetic and political power with a well-researched and playful account of its legacy, We’ll Always Have Casablanca is a necessary book and perhaps even an urgent one.” — Noah Gittell, Los Angeles Review of Books

“Anyone interested in the magic of movies will relish this book.” — Tavo Amador, Bay Area Reporter

“As Noah Isenberg details in his excellent new book We’ll Always Have Casablanca, the 1942 film is a case study of how history gets depicted for popular entertainment, but it is also a powerful example of how the Hollywood machine produced work that intersected with political commitment while still holding fast to its romantic conventions.” — Michael S. Roth, Chronicle of Higher Education

“Four out of four stars.… Isenberg’s great contribution is tying together the production [of Casablanca] and its legacy.” — Bill Desowitz, USA Today

“Noah Isenberg brings an appropriate passion to his pop analysis of [Casablanca], along with a delight of details and some savvy reassessments.” — John Anderson, Newsday

“Isenberg gives us… a rich miscellany of material that will delight fans of both the film and Hollywood’s golden era. His research is clearly second to none.” — Lucy Scholes, Times Literary Supplement