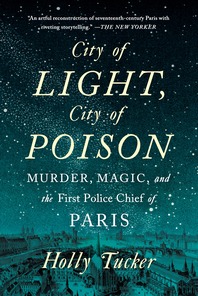 Appointed to conquer the "crime capital of the world", the first Paris police chief faces an epidemic of murder.

In the late 1600s, Louis XIV assigns Nicolas de la Reynie to bring order to the city of Paris after the brutal deaths of two magistrates. Reynie, pragmatic yet fearless, tackles the dirty and terrifying streets only to discover a tightly knit network of witches, poisoners and priests whose reach extends all the way to Versailles. As the chief investigates a growing number of deaths at court, he learns that no one is safe from their deadly love potions and "inheritance stews"—not even the Sun King himself.

Based on court transcripts and Reynie’s compulsive note-taking, Holly Tucker’s riveting true crime narrative makes the characters breathe on the page as she follows the police chief into the dark labyrinths of crime-ridden Paris, the glorious halls of royal palaces, secret courtrooms and torture chambers in a tale of deception and murder that reads like fiction.

“Tucker is an assiduous researcher and a serious historian, but she also uses her imagination in the style of a novelist...[she] provides a splendidly detailed and at times disgusting picture of the criminal underworld of Paris, and of Madame Voisin and her collaborators.” — Literary Review

“It [City of Light, City of Poison is excellent material for a romp... it is never less than gripping and enjoyable, animated by Tucker's eye for detail and the gruesomeness of events.” — The Sunday Telegraph

“The best books of this type – of which City of Light, City of Poison is undoubtedly one – combine the narrative energy of crime fiction with the faintly prurient nature of true crime and the academic persistence of the specialist historian.” — Times Higher Education

“Concise, clear and thorough, it [City of Light, City of Poison] is a highly readable and even gripping account…” — Historical Novel Society