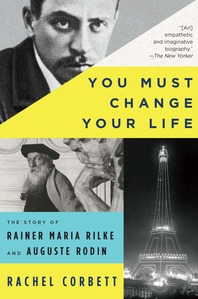 The extraordinary story of the one of the most fruitful friendships in modern arts and letters.

In Paris in 1902, Auguste Rodin had just completed The Thinker; visiting from Prague was Rainer Maria Rilke, broke and with writer’s block. When Rilke was commissioned to write a book about Rodin, everything changed. You Must Change Your Life tells one of the great stories of modern art and literature: Rodin and Rilke’s years together as master and disciple, their heartbreaking rift and finally, their moving reconciliation. Rachel Corbett reveals how Rodin’s friendship led Rilke to write his most celebrated poems and inspired his Letters to a Young Poet. She captures the dawn of Modernism amid the characters that made up Rilke and Rodin’s circle, including Paul Cezanne, Henri Matisse, Lou Andreas-Salome, George Bernard Shaw and Jean Cocteau. And she recounts the friendship of two artists whose work reverberates a century later.

"...splendid new book...Corbett looks into life as deeply as is possible for answers, but she knows when to stop. This is the hallmark of her moral intelligence." — The Art Newspaper

"... she [Rachel Corbett] evokes the interaction between Rodin's and Rilke's circumstances and mental states in vivid detail... The result of her efforts is a beautiful exercise in compact, interwoven double biography." — Times Literary Supplement

"... the moving story of Rilke and Rodin is worth as much as the best self-help books and manuals, and one could definitely learn a lot from their relationship... Corbett’s original book stands as an urgent invitation to revisit both Rilke’s poems and Rodin’s sculptures." — World Literature Today

"You Must Change Your Life is an enthralling exploration of the complex relationship between two creative giants of art and literature, drawn together in Paris at the birth of a new century... Corbett... sustains the reader’s interest through intellectual rigour, elegance, and above all empathy." — The London Magazine