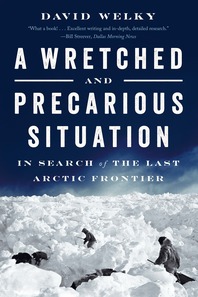 A remarkable true story of adventure, betrayal and survival set in one of the world’s most inhospitable places.

In 1906, from the ice fields northwest of Greenland, Commander Robert E. Peary spotted an unknown land in the distance. He called it “Crocker Land”. Scientists and explorers agreed that Peary had found a new continent. Several years later, two of his disciples, George Borup and Donald MacMillan—with the sponsorship of the American Museum of Natural History—assembled a team to investigate. They pitched their two-year mission as a scientific tour de force to fill in the last blank space on the globe. But the Crocker Land Expedition became a five-year ordeal that endured a fatal boating accident, a drunken captain, a shipwreck, marooned rescue parties, disease, dissension and a crewman-turned-murderer. Based on a trove of unpublished letters, diaries and field notes, A Wretched and Precarious Situation is a harrowing adventure.

“Unravels the strange story of one of the world's greatest discoveries that never was.” — National Geographic

“Polar historians will be grateful to have the Crocker Land expedition properly documented.” — ., The New York Times Book Review

“The true story of the Crocker Land Expedition to find a new continent northwest of Greenland in the early 20th century.” — What We're Reading, The Independent