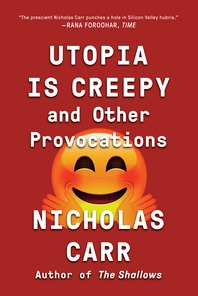 Trenchant writing from a Pulitzer Prize finalist that dissects our obsession with technological utopia and looks towards a smarter future.

Nicholas Carr has made his name as an incisive writer on our complicated relationship with technology. Utopia Is Creepy, a sharp and often funny indictment of our tech-besotted culture, collects essays drawn from Carr’s popular blog Rough Type as well as seminal pieces that first appeared in The Atlantic, the MIT Technology Review and The Wall Street Journal, to provide an alternative history of our digital age over the last ten years. Carr lays bare the pitfalls alongside the benefits of the internet age, and dissects the philistinism and misanthropy that underlie Silicon Valley’s “liberation mythology”. With assessments of some of the crucial issues of the day, from online surveillance to the state of public discourse, Carr puts his finger on today’s most pressing issues.

“[F]ull of wry vignettes and articles lampooning the motivated enthusiasm and game-changing promises of Silicon Valley’s tech bro elite… by turns cute, funny or chilling. And it’s more than the sum of its parts.” — Sally Adee, New Scientist