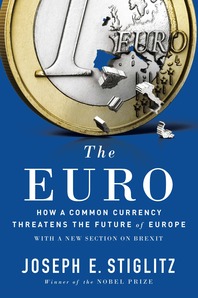 The Nobel Prize–winning economist and best-selling author explains why saving Europe may mean abandoning the euro.

When Nobel Prize–winning economist Joseph E. Stiglitz posed this question in the original edition of The Euro, he lent much-needed clarity to a global debate that continues to this day. The euro was supposed to unify Europe and promote prosperity; in fact, it has done just the opposite. To save the European project, the euro may have to be abandoned. Since 2010, many of the 19 countries of Europe that share the euro currency—the eurozone—have been rocked by debt crises and mired in lasting stagnation, and the divergence between stronger and weaker economies has accelerated. In The Euro, Joseph E. Stiglitz explains precisely why the eurozone has performed so poorly, so different from the expectations at its launch: at the core of the failure is the structure of the eurozone itself, the rules by which it is governed. Stiglitz reveals three potential paths forward: drastic structural reforms, not of the individual countries, but of the eurozone; a well-managed dissolution of the euro; or a bold new system dubbed the “flexible euro.” With trenchant analysis—and brand new material on Brexit—The Euro is urgent and timely reading.

“[Stiglitz] is surely right. Without a radical overhaul of its workings, the euro seems all but certain to fail.” — The Economist

“Many of Mr. Stiglitz’s most damning observations are on target.” — Wall Street Journal

“Stiglitz lucidly and forcefully argues that [the euro] was an economic experiment of unprecedented magnitude.… [He] gives a detailed and persuasive list of measures that would help save the euro.” — John Lanchester, New Yorker

“Stiglitz’s verdict is convincing.… We should brace ourselves, over the next few years, for what may be a difficult economic divorce.” — Rana Foroohar, New York Review of Books

“Much more than a demolition job. These chapters are full of constructive proposals—a glimpse of what the ‘rescues’ would have looked like had the troika, perish the thought, hired their critic Stiglitz to design them.” — Marin Sandbu, Financial Times

“The euro is a modern tragedy.…As its embarrassments have mounted, its supporters club has teemed with political romantics and Europhile journalists. Stiglitz’s message to such people is that they are inadvertently destroying what they most cherish.” — Paul Collier, Times Literary Supplement

“Stiglitz seeks to salvage the Eurozone experiment and the future of globalized Europe. And not a moment too soon!” — Anderson Tepper, Vanity Fair

“Stiglitz argues with his customary force and lucidity that adopting a single European currency was a fatal error.” — Jeet Heer, New Republic