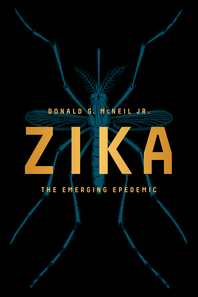 A gripping narrative about the Zika virus outbreak from The New York Times science reporter covering the epidemic.

Until recently, Zika virus – once considered a mild disease – was hardly a cause for global panic. But as early as August 2015, doctors in Brazil’s northeast region began to notice a trend: many mothers who had recently experienced Zika symptoms were giving birth to babies with microcephaly, a serious disorder characterised by unusually small heads and brain damage. By the beginning of 2016, Zika was making headlines as evidence mounted and eventually confirmed that mircocephaly is a direct result of the virus which can be contracted through mosquito bites or sexually transmitted. As reported cases inch northward, the question of the moment is how far will the epidemic spread?

In Zika, The New York Times science reporter Donald G. McNeil Jr. sets the facts straight in a fascinating exploration of Zika’s origins, how it is spreading, the race for a cure and what we can do to protect ourselves now.

“... I find much to applaud in Mr. McNeil’s Zika... In a no-nonsense, declarative writing style, Mr. McNeil tells the history of humanity’s relationship with the Zika virus... [He] ends with simple words: “Stay alert. And empathetic". That’s not a bad summary of how all of us — public health experts, politicians, ordinary citizens — should respond to outbreaks of contagious disease.” — The New York Times