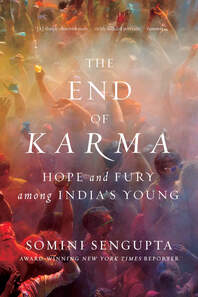 A penetrating, personal look at contemporary India—the world’s largest democracy at a moment of transition.

This "remarkable new book" (The Observer) is an exploration of the new India through the lens of young people from different worlds: a woman who becomes a Maoist rebel; a brother charged for the murder of his sister who had married the "wrong" man; and a woman who opposes her family and hopes to become a police officer. They are making new demands on India’s democracy for equality of opportunity, dignity for girls and civil liberties. Somini Sengupta spotlights these stories of ordinary people, weaving together a portrait of a country in turmoil.

“[Sengupta] marvels at the resulting ambition and ingenuity, while also observing the power of residual caste and gender prejudices.” — The New Yorker

“How India’s youth are trading fatalism and karma for free will and higher expectations, by a former New York Times New Delhi bureau chief who interweaves data, first-hand accounts and archival research to great effect.” — Best Books of 2016, The Economist

“For a topical taste of India on the turn, Somini Sengupta's The End of Karma offers just the ticket.” — Literary Review