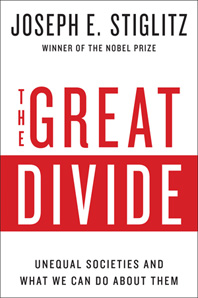 In the face of rising inequality in America, Joseph E. Stiglitz charts a path toward real recovery and a more equal society.

A singular voice of reason in an era defined by bitter politics and economic uncertainty, Joseph E. Stiglitz has time and again diagnosed America’s greatest economic challenges, from the Great Recession and its feeble recovery to the yawning gap between the rich and the poor. The Great Divide gathers his most provocative reflections to date on the subject of inequality. As Stiglitz ably argues, a healthy economy and a fairer democracy are within our grasp if we can put aside misguided interests and ideologies and abandon failed policies. Opening with the essay that gave the Occupy Movement its slogan, “We are the 99%,” later essays in The Great Divide reveal equality of opportunity as a national myth, show that today’s outsized inequality is a matter of choice, and explain reforms that would spur higher growth, more opportunity, and greater equality.