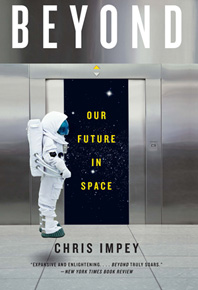 Beyond dares to imagine a fantastic future for humans in space—and then reminds us that we're already there.

With plans to launch hotels into orbit and experiments in suspending and reanimating life for ultra-long-distance travel, private companies and entrepreneurs have outpaced NASA as the leaders in the new space race. With accessible prose and relentless curiosity, Chris Impey reports on China’s plan to launch its own space station by 2020, proves that humans could survive on Mars and unveils cutting-edge innovations such as the space elevators poised to replace rockets at a fraction of the cost. Setting mankind’s urge towards exploration in the context of all human history and space travel thus far, he shows that the present-day scientists mapping billions of Earth-like exo-planets are the descendants of the first humans to venture out of Africa. We must forge ahead, argues Beyond, because exploration is in our DNA.

“...an engagingly written and stimulating thesis.” — Sky at Night

“An astronomer and popular-science author, Impey makes an affable and generally even-handed guide to this fascinating subject, balancing rhetoric about humankind's restless curiosity with sober assessments of what is and is not possible.” — Physics World

“Impey's engaging text is easy to read and comprehend, while offering a positive prognosis for humanity's future in space.” — Observatory Magazine

“Beyond is a compelling book with great attention to detail and science that is awe-inspiring—it is a stellar read indeed.” — Astronomy Now

“For those who like their history potted and their technology humanised, this could be the perfect primer.” — Engineering & Technology