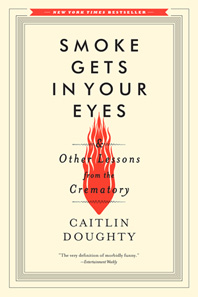 "Morbid and illuminating" (Entertainment Weekly)—a young mortician goes behind the scenes of her curious profession.

Armed with a degree in medieval history and a flair for the macabre, Caitlin Doughty took a job at a crematory and turned morbid curiosity into her life’s work. She cared for bodies of every color, shape, and affliction, and became an intrepid explorer in the world of the dead. In this best-selling memoir, brimming with gallows humor and vivid characters, she marvels at the gruesome history of undertaking and relates her unique coming-of-age story with bold curiosity and mordant wit. By turns hilarious, dark, and uplifting, Smoke Gets in Your Eyes reveals how the fear of dying warps our society and "will make you reconsider how our culture treats the dead" (San Francisco Chronicle).

“In a moving—and often funny—memoir about working in a crematorium and other parts of the ‘death industry,’ Caitlin Doughty argues for radical change in how we face the details of death.” — Jessica Ferri, Daily Beast

“Alternately heartbreaking and hilarious, fascinating and freaky, vivid and morbid, Smoke Gets in Your Eyes is witty, sharply drawn, and deeply moving. Like a poisonous cocktail, Caitlin Doughty’s memoir intoxicates and enchants even as it encourages you to embrace oblivion; she breathes life into death.” — Dodai Stewart, deputy editor of Jezebel.com

“Caitlin Doughty takes you to places you didn’t know you wanted to go. Fascinating, funny, and so very necessary, Smoke Gets in Your Eyes reveals exactly what’s wrong with modern death denial.” — Bess Lovejoy, author of Rest in Pieces: The Curious Fates of Famous Corpses

“This book absolutely must be read, if only to remind all of us that exercise, organic food, and plastic surgery only work up to a point. Doughty is my kind of death crusader—compassionate, unblinking, and very, very funny.” — Meg Rosoff