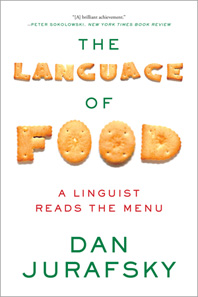 Ketchup began as a fermented fish sauce from China’s Fujian province: ke for fermented fish, tchup for sauce. The British were the first to add tomatoes to their anchovy “catsup” in 1817. A century later, Heinz changed the spelling again—and added sugar.

In The Language of Food, Dan Jurafsky opens a panoramic window onto everything from the modern descendants of ancient recipes to the hidden persuasion in restaurant reviews. Combining history with linguistic analysis, Jurafsky uncovers a global atlas of premodern culinary influence: why we toast to good health at dinner and eat toast for breakfast and why the Chinese don’t have a word for "dessert". Engaging and eclectic, Jurafsky’s study reveals how everything from medieval meal order to modern menu design informs the way we drink and dine today. Tuck in!

“His [Jurafsky's] decoding of food-related texts is the most original aspect of a work that is entertaining and revealing throughout.” — The Economist

“This book won’t put dinner on the table, but it just might improve how you order in a restaurant.” — Tony Turnbull, Christmas Round-ups 2014, The Times

“I found The Language of Food eye-opening, insightful and huge fun to read, with surprises and treats on every page.” — Bee Wilson

“What [Dan Jurafsky] doesn't know about the etymology of food and catering is not worth knowing...[his] deconstruction of a menu...is an object lesson in food PR.” — The Independent