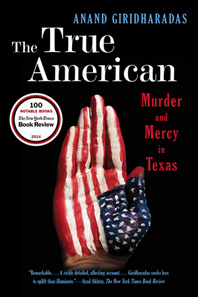 Imagine that a terrorist tried to kill you. If you could face him again, on your terms, what would you do?

Anand Giridharadas’s deeply moving new work of narrative non-fiction tells the story of Raisuddin Bhuiyan, a former Bangladeshi Air Force officer who moved to America with a dream of starting a new life. That dream falters when, after 9/11, Mark Stroman, a self-declared "American terrorist" walked into the Dallas corner shop where Bhuiyan worked and shot him in the face, nearly ending his life. Then, a decade after the shooting, in a remarkable act of mercy, Bhuiyan forgave Stroman and fought a legal battle against Governor Rick Perry, in the name of Shariah law and the US Constitution, attempting to spare from execution the man who tried to kill him.

The True American is about America’s love-hate relationship with immigrants, about the meeting of Islam and the West and about whether we choose who we become or let ourselves be hemmed in by history.

“In telling the story of Raisuddin Bhuiyan, an immigrant who pleaded for clemency for the white racist who tried to kill him, Anand Giridharadas presents an absorbing, haunting picture of what has happened to large tranches of the US.” — The Irish Times