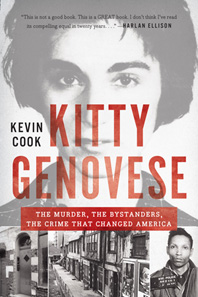 On the fiftieth anniversary of her murder, Kitty Genovese transcends the mythology of the tragic story and the famous association with the "bystander effect".

In 1964 a woman was stabbed to death in front of her home in New York, a murder The New York Times called "a frozen moment of dramatic, disturbing social change". The victim, Catherine "Kitty" Genovese, became an urban martyr, butchered in sight of thirty-eight neighbours who "didn’t want to get involved". Her sensational case provoked an outcry and launched a sociological theory known as the "Bystander Effect".

On the fiftieth anniversary of her murder, Kevin Cook presents the real Genovese. "Gripping" (The New York Times) and "Provocative" (The Wall Street Journal), Kitty Genovese evokes the gay and lesbian underground of Greenwich Village with feeling and detail. Cook reconstructs the crime, and drawing on lost documents and new interviews, explores the legacy of the case. His account of what happened is the most accurate and chilling to date.

“Kevin Cook takes the story apart and puts it back together again. His punchy account of this famous event reveals that almost everything we think we know about it is wrong.” — Daniel Finkelstein, Christmas Round-Ups 2014, The Sunday Times

“Cook is [an] adept storyteller.” — The New Yorker

“A fully-realized portrait of Kitty... Readers won't forget that she was a person, not a player in an anecdote.” — The Boston Sunday Globe

“A grim and fascinating history and discussion of the bystander effect... this book asks hard questions of human nature.” — Diva

“...the book is brilliantly written, a veritable prose docudrama, full of suspense and tension, despite known outcomes.” — Human Givens