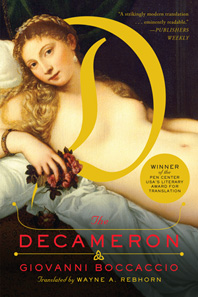 “Rebhorn deserves our gratitude for an eminently persuasive translation...I celebrate his accomplishment.”—Edith Grossman

Ten young Florentines flee the Black Death of 1348 by escaping to a country villa overlooking the city. There they spend ten days telling each other one hundred stories. Their stories run the gamut of medieval genres—romance, tragedy, comedy and farce—and are rich with wit, earthiness and even bawdy irreverence.

Boccaccio’s reputation as one of the world’s greatest authors rests entirely on this singular, overflowing work. A tribute to the essential power of storytelling and laughter, even in the most trying times, The Decameron has been a source and inspiration for countless other storytellers over the centuries. Published on the 700th anniversary of Boccaccio’s birth, Wayne A. Rebhorn’s Decameron now speaks to us directly in a "lively, contemporary... English" (Stephen Greenblatt).

“An inexhaustibly rich late-medieval feast... a celebration of the sheer pleasure of being alive.” — Stephen Greenblatt

“...fluent and elegant new translation...His [Rebhorn's] introduction and notes are all we could wish for and the achievement genuinely honours its original.” — Jonathan Keates, The Telegraph

Also By: Wayne A. Rebhorn