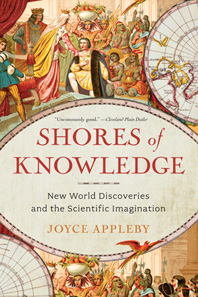 An engrossing history of the voyages of exploration that ignited curiosity about nature and gave birth to modern science.

When Columbus first returned to Europe from the Caribbean, he presented King Ferdinand and Queen Isabella with exotic parrots, tropical flowers and bits of gold. The search for riches spurred Columbus and others to voyage the oceans with similar ambitions and these seafarers continued to return with mysterious specimens encountered in the New World. Curiosity began to percolate through Europe. The Church, long fearful of challenges to its authority, could no longer suppress the mantra "Dare to know!" Recounting the triumphs and mishaps of these explorers, Joyce Appleby’s book follows the naturalists, both famous and obscure, whose investigations of the world’s fauna and flora fuelled the rise of science and technology that propelled Western Europe towards modernity.