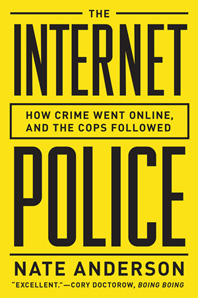 Nate Anderson ventures behind the screens of landmark cybercrime cases that test the limits of law and order online.

Australian police uncover a laptop filled with child pornography; Belgian investigators trace the videos to a Ukrainian "studio" where they were filmed; the studio owner reveals the e-mail addresses of 20,000 American clients—and the FBI uncovers the largest child porn ring in US history. The discovery of "The Cache" offers a disturbing portrait of how criminals operate online—and how investigators have learned to respond. This is just one of the stories in The Internet Police, in which Nate Anderson gives readers a look at how the Internet was patrolled by "Carnivore", the FBI’s Internet wiretap tool; how the man behind the "natural male enhancement" pill Enzyte helped protect the privacy of e-mail and why a Russian spam king ended up in jail after a trip to Las Vegas. The Internet: borderless, anonymous, chaotic? Not any more.