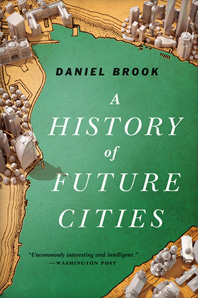 Hailed as an “original and fascinating book” (Times Literary Supplement), A History of Future Cities is Daniel Brook’s captivating investigation of four “instant cities”—St. Petersburg, Shanghai, Mumbai, and Dubai—that sought to catapult themselves into the future by emulating the West.

“Excellent…A History of Future Cities succeeds not by claiming a false comprehensiveness but by plunging into the chaos and productive confusions of the past.” — Casey Walker, Los Angeles Review of Books

“An interesting thesis about the city’s role in fomenting political change in the modern era.” — The New Yorker

“The pleasure in Mr. Brook’s unusual history is in his descriptions of the creation of these cities. The deeper message, though, is about the tensions such cities create.” — Philip Delves Broughton, Wall Street Journal

“Whatever the futures of these four cities hold, Brook cautions that progress and growth need more than construction projects and infrastructure.” — The Daily Beast

“Penetrating…[Brook] sketches a portrait of a place that is not just a city, but an idea, and a dream.” — Parag Khanna, CNN