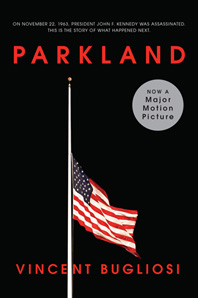 “As good a second-by-second reconstruction of the assassination and its aftermath as I’ve read.” Bryan Burrough, The New York Times

Parkland is an extraordinarily exciting, precise and definitive narrative of the assassination of President John F. Kennedy on 22 November 1963, by Lee Harvey Oswald. It is drawn from Reclaiming History, a huge and historic account of the event and all the conspiracy theories it spawned. For general readers, the carefully documented account presented in Parkland is utterly persuasive: Oswald did it and he acted alone. The Norton title Four Days in November has been made into a film called Parkland so the title of the movie tie-in is Parkland to match. The movie stars Zac Efron, Jacki Weaver, Brett Stimely, Paul Giamatti, Billy Bob Thornton and is directed by Peter Landesman.

“...the inclusion of a detailed timeline and extensive interviews make Parkland a valuable resource.” — Glasgow Herald