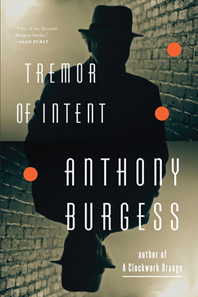 A brilliantly funny spy novel, this morality tale of a Secret Service gone mad features sex, gluttony, violence, and treachery. From the author of the ground-breaking A Clockwork Orange.

Denis Hillier is an aging British agent based in Yugoslavia. His old school friend Roper has defected to the USSR to become one of the evil empire's great scientific minds. Hillier must bring Roper back to England or risk losing his fat retirement bonus. As thoughtful as it is funny, this morality tale of a Secret Service gone mad features sex, gluttony, violence, treachery, and religion. Anthony Burgess's cast of astonishing characters includes Roper's German prostitute wife; Miss Devi and her Tamil love treatise; and the large Mr. Theodorescu, international secret monger and lascivious gourmand. A rare combination of the deadly serious and the absurd, the lofty and the lusty, Tremor of Intent will hold you in its thrall.

“Tremor of Intent has more wit and comic invention than the books which it so boisterously ridicules…The talent is as unsettling as it is prodigious.” — New Republic

“A gleaming novel of ideas…brazenly clever. He is possessed by a black sense of humor…Burgess is nothing if not outrageous.” — Webster Schott, New York Times Book Review

“One of my favorite Burgess books. I think he set out to write a satire of a spy novel but he made the story, the writing, the characters, so good that it became an amusing spy novel.” — Alan Furst, author of Mission to Paris