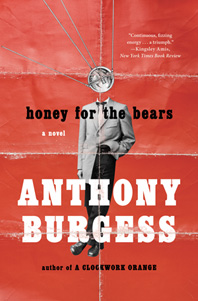 "There are so few genuinely entertaining novels around that we ought to cheer whenever one turns up. Continuous, fizzing energy…Honey for the Bears is a triumph." —Kingsley Amis, New York Times

A sharply written satire, Honey for the Bears sends an unassuming antiques dealer, Paul Hussey, to Russia to do one final deal on the black market as a favor for a dead friend's wife. Even on the ship's voyage across, the Russian sensibility begins to pervade: lots of secrets and lots of vodka. When his American wife is stricken by a painful rash and he is interrogated at his hotel by Soviet agents who know that he is trying to sell stylish synthetic dresses to the masses starved for fashion, his precarious inner balance is thrown off for good. More drink follows, discoveries of his wife's illicit affair with another woman, and his own submerged sexual feelings come breaking through the surface, bubbling up in Russian champagne and caviar.

“It is a very funny, unbalancing, and contentedly schizoid novel that reduces the cold war to an intimate kind of insanity.” — Newsweek

“Honey for the Bears is one of the best-planned and most brilliantly executed books I have seen in a long time. The reader…is in the presence of a virtuoso.” — Saturday Review