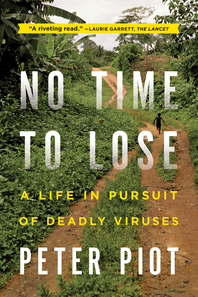 When Peter Piot was in medical school, a professor warned, “There’s no future in infectious diseases. They’ve all been solved.” Fortunately, Piot ignored him, and the result has been an exceptional, adventure-filled career. In the 1970s, as a young man, Piot was sent to Central Africa as part of a team tasked with identifying a grisly new virus. Crossing into the quarantine zone on the most dangerous missions, he studied local customs to determine how this disease—the Ebola virus—was spreading. Later, Piot found himself in the field again when another mysterious epidemic broke out: AIDS. He traveled throughout Africa, leading the first international AIDS initiatives there. Then, as founder and director of UNAIDS, he negotiated policies with leaders from Fidel Castro to Thabo Mbeki and helped turn the tide of the epidemic. Candid and engrossing, No Time to Lose captures the urgency and excitement of being on the front lines in the fight against today’s deadliest diseases.

"An invaluable portrait of the evolution of international health in recent decades…We need more people like Peter Piot who will rise to the occasion with spirit and passion." — William Bynum, Wall Street Journal

"[A] fascinating account of the complex behavioural responses that epidemics trigger among their human hosts." — José Esparza, Nature

"From laboratories to field epidemiology, boardrooms and political chambers, [No Time To Lose] charts an incredibly impactful career in science and the fine arts of diplomacy, communication and political engagement in difficult situations." — Chikwe Ihekweazu, Nature

"Piot helped assure that affordable drugs revolutionizing AIDS treatment would be available to the poorest victims. He leaves a legacy of change and hope in two worlds—medicine and politics—and an urgent reminder that their cooperation saves lives." — Publishers Weekly (starred review)