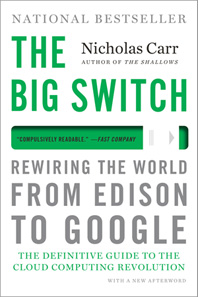 “Magisterial…Draws an elegant and illuminating parallel between the late-19th-century electrification of America and today’s computing world.” —Salon

Hailed as “the most influential book so far on the cloud computing movement” (Christian Science Monitor), The Big Switch makes a simple and profound statement: Computing is turning into a utility, and the effects of this transition will ultimately change society as completely as the advent of cheap electricity did. In a new chapter for this edition that brings the story up-to-date, Nicholas Carr revisits the dramatic new world being conjured from the circuits of the “World Wide Computer.”

“The best read so far about the significance of the shift to cloud computing.” — Financial Times

“Mr. Carr’s provocations are destined to influence CEOs and the boards and investors that support them as companies grapple with the constant change of the digital age.” — Wall Street Journal

“The Big Switch is thought-provoking and an enjoyable read, and the history of American electricity that makes up the first half of the book is riveting stuff.” — New York Post