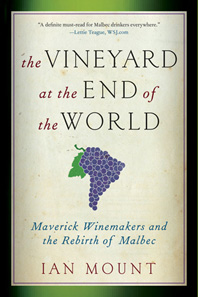 As wine connoisseurs know, Argentine wine was once famously bad. The grapes were overwatered, harvested in brutal heat, fermented in enormous cement pools, aged in antiquated oak vats, and then watered down and adulterated. The final product was industrial plonk, drinkable only on ice. But in 2001, a Cabernet Sauvignon / Malbec blend beat Napa and Bordeaux’s finest in a blind taste test. Suddenly, Argentina emerged as a premier wine region with a champion varietal—what best-selling author Benjamin Wallace calls “the humble Malbec.” How did this happen?

Ian Mount’s vivid journey through Argentina’s Wild West explores the alchemy of weather, soil, and viticulture techniques that, on rare occasions, produce a legendary bottle of wine. He also investigates the dynamics of taste, status, and money that turned Malbec into a worldwide phenomenon.

Set against the breathtaking backdrop of the snow-capped Andes and Mendoza’s sweeping plains, The Vineyard at the End of the World tells the fascinating, four-hundred-year story of how a wine mecca arose in the Argentine desert. It is at once a sumptuous travel narrative, a riveting history of a fascinating region, and an intriguing business story in which a small group of passionate vintners remade their world.