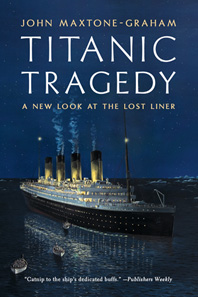 In Titanic Tragedy maritime historian John Maxtone-Graham documents the vessel’s design, construction, and departure from Southampton, her passengers’ lifeboat ordeal, their Carpathia rescue, the role of new technologies, and memorials to her crew. He describes poignantly the performance of her eight gallant bandsmen who played on deck to the very end; none survived. Added historical bonuses include seven letters, ostensibly from a Titanic passenger. In fact, they were written by one of America’s most eminent historians, Walter Lord, author of the seminal A Night to Remember of 1955. His devastating parodies about life aboard the doomed ship appear here in print for the first time.

“An honorable, scholarly, and fascinating contribution to the often degraded Titanic saga, from the undisputed laureate of the North Atlantic.” — Jan Morris

“One of the deans of maritime history returns with some sidebars to enlarge the hefty history of the Titanic.” — Kirkus Reviews