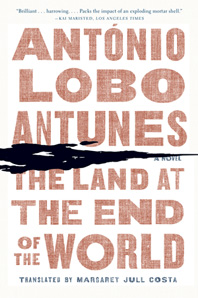 In the tradition of William Faulkner and Gabriel García Márquez, one of the twentieth century’s most original literary voices offers "kaleidoscopic visions of a modern Portugal scarred by its Fascist past and its bloody colonial wars in Africa" (Paris Review). Hailed as a masterpiece of world literature, The Land at the End of the World—in an acclaimed translation by Margaret Jull Costa—recounts the anguished tale of a Portuguese medic haunted by memories of war. Like the Ancient Mariner who will tell his tale to anyone who listens, the narrator’s evening unfolds like a fever dream that is both tragic and haunting. The result is one of the great war novels of the modern age.

“[Antunes] has created a memorably unhinged narrator, and [Costa] manages to capture, perfectly and faithfully, the bitter, hallucinatory and increasingly desperate tone of his monologue.” — Larry Rohter, New York Times

“Lobo Antunes crafts macabre fever dreams as if possessed by an abler Poe, and few other novelists have his Bellovian ability to see both deeply and minutely, to render the world, the fallen world, as if never rendered before.” — William Giraldi, Daily Beast

“Read António Lobo Antunes' The Land at the End of the World, and you, like the protagonist, may never forget the hallucinatory depravity, degradation and corruption of an unjust war.” — Kai Maristed, Los Angeles Times

“Magnificent prose, dense with striking and unexpected imagery…I was so seized by the novel's spirit that I was motivated to turn to my own. I wanted to imitate Lobo Antunes, and I failed.” — Viet Thanh Nguyen, Pulitzer Prize-winning author of The Sympathizer