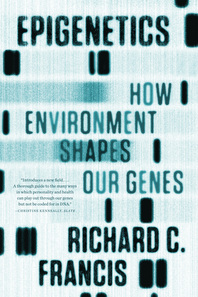 Goodbye, genetic blueprint. . . . The first book for general readers on the game-changing field of epigenetics.

The burgeoning new science of epigenetics offers a cornucopia of insights—some comforting, some frightening. For example, the male fetus may be especially vulnerable to certain common chemicals in our environment, in ways that damage not only his own sperm but also the sperm of his sons. And it’s epigenetics that causes identical twins to vary widely in their susceptibility to dementia and cancer. But here’s the good news: unlike mutations, epigenetic effects are reversible. Indeed, epigenetic engineering is the future of medicine.

"Epigenetics explains all this in clear, no-nonsense prose. . . . One particularly excellent chapter explains epigenetic change through the body of steroid-addled baseball player José Canseco, from his brain to his testicles." — Josh Rothman, Boston Globe

"Francis’s primer introduces a new field. It’s a thorough guide to the many ways in which personality and health can play out through our genes but not be coded for in DNA." — Christine Kenneally, Slate