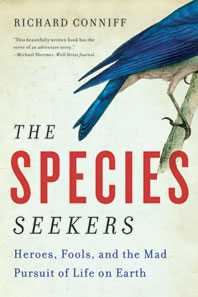 "This beautifully written book has the verve of an adventure story." —Wall Street Journal

From the mid-eighteenth century to the early twentieth, a colorful band of amateur naturalists explored the most perilous corners of the planet to discover new life-forms. Amid globe-spanning tales of adventure, Richard Conniff recounts a dramatic historical shift, as humans finally discovered the pantheon of life on Earth-and our place within it.

“An anecdotal romp through the strange history of naturalism. Absurd characters, exciting discoveries, and fierce rivalries abound.” — Outside Magazine

“An enduring story bursting at the seams with intriguing, fantastical and disturbing anecdotes.” — New Scientist

“[Conniff’s] enthusiasm for his subject and admiration of these explorers is infectious…an entertaining survey.” — Kirkus Reviews

“[This] history of the ‘great age of discovery’ is spellbinding.” — Publishers Weekly

“Modern biology and medicine would not be what they are today if not for the death-defying naturalists who set out to travel the world and find new species. In The Species Seekers, Richard Conniff creates a marvelous rogues’ gallery of these brave, sometimes reckless heroes of taxonomy, full of surprising tales of gorillas, platypuses, and disease-laden mosquitoes.” — Carl Zimmer, author of Parasite Rex

“A marvelous tribute to the age of wonder.” — Bernd Heinrich, author of The Nesting Season