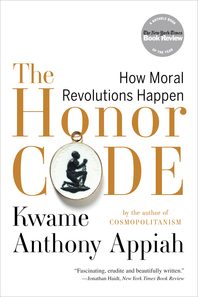 In this groundbreaking work, Kwame Anthony Appiah, hailed as "one of the most relevant philosophers today" (New York Times Book Review), changes the way we understand human behavior and the way social reform is brought about. In brilliantly arguing that new democratic movements over the last century have not been driven by legislation from above, Appiah explores the end of the duel in aristocratic England, the tumultuous struggles over footbinding in nineteenth-century China, the uprising of ordinary people against Atlantic slavery, and the horrors of "honor killing" in contemporary Pakistan. Intertwining philosophy and historical narrative, he has created "a fascinating study of moral evolution" (Philadelphia Inquirer) that demonstrates the critical role honor plays a in the struggle against man's inhumanity to man.

"What causes moral progress? In this brilliant book, Appiah casts light on the role played by honor. Even though it's sometimes distorted, as with honor killings in Pakistan, this classical concept can be a lode star in guiding us to a better future. It's an amazing and fascinating insight. This is an indispensable book for both moral philosophers and honorable citizens." — Walter Isaacson, author of Einstein: His Life and Universe

"Appiah lays out a concept that is not only compelling in its own right but also suggests a connection that may in time help to collate biological and cultural exploration of human morality." — Edward O. Wilson, author of Sociobiology

"A deeply insightful exposition of the dangers, the potential and the (perhaps) ineradicable role of the human sense of honor." — Charles Taylor, Professor Emeritus of Philosophy, McGill University

"This book is essential for us—inescapable in its urgent relevance to the embattled human morality we live within our codes of the present." — Nadine Gordimer, author of Telling Times