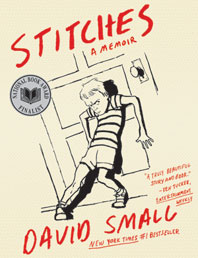 David Small, a best-selling and highly regarded children's book illustrator, comes forward with this unflinching graphic memoir. Remarkable and intensely dramatic, Stitches tells the story of a fourteen-year-old boy who awakes one day from a supposedly harmless operation to discover that he has been transformed into a virtual mute—a vocal cord removed, his throat slashed and stitched together like a bloody boot. From horror to hope, Small proceeds to graphically portray an almost unbelievable descent into adolescent hell and the difficult road to physical, emotional, and artistic recovery.

“A profound and moving gift of graphic literature that has the look of a movie and reads like a poem.” — Jules Feiffer