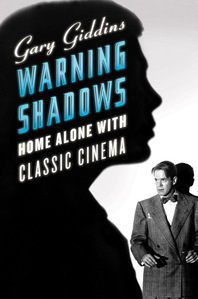 A brilliantly insightful and witty examination of beloved and little-known films, directors, and stars by one of America’s most esteemed critics.

In his illuminating new work, Gary Giddins explores the evolution of film, from the first moving pictures and peepshows to the digital era of DVDs and online video-streaming. New technologies have changed our experience of cinema forever; we have peeled away from the crowded theater to be home alone with classic cinema. Recounting the technological developments that films have undergone, Warning Shadows travels through time and across genres to explore the impact of the industry’s most famous classics and forgotten gems. Essays such as “Houdini Escapes! From the Vaults! Of the Past!,” “Edward G. Robinson, See,” and “Prestige and Pretension (Pride and Prejudice)” capture the wit and magic of classic cinema. Each chapter—ranging from the horror films of Hitchcock to the fantastical frames of Disney—provides readers with engaging analyses of influential films and the directors and actors who made them possible.

“Giddins is the ideal couch companion, erudite but relaxed and witty; his perceptive commentary shows that it’s not what you watch, it’s how you watch it.” — Publishers Weekly

“Giddins writes with empathy and insight on such cinematic icons as Edward G. Robinson and Joan Crawford, paying close attention to the meanings of their mannerisms and their enduring fascination as creators of quirky behavior. The essays on directors Samuel Fuller and Sidney Lumet are shrewd appreciations of their cinematic styles; unlike most film reviewers, Giddins knows his way around visual language and uses his jazzy sense of verbal style to zero in on cinematic touches that convey a vision of the world.” — Joseph McBride, San Francisco Chronicle

“Most film fanatics I know keep several film guides within arm's reach of their home cinemas, then use supplementary texts by such writers as Peter Bogdanovich, Gerald Mast and Ephraim Katz. To this batch on my shelf, I have added Warning Shadows.” — William Kist, Cleveland Plain Dealer

“[S]hould be in the knapsack or survival kit of every Golden Age Hollywood enthusiast/amateur scholar/completist queen as a standby Bible for instruction, inspiration, and succor.” — James Wolcott, VanityFair.com