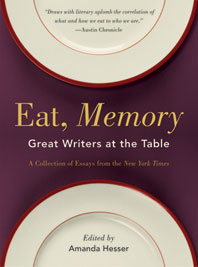 “Draws with literary aplomb the correlation of what and how we eat to who we are.”—Austin Chronicle

Memorable moments with food—collected by "one of the best of the young food writers" (Jeffrey Steingarten, Vogue food critic). New York Times Magazine food editor Amanda Hesser has showcased the food-inspired recollections of some of America's leading writers—playwrights, screenwriters, novelists, poets, journalists—in the magazine. Eat, Memory collects the best stories and recipes to accompany them.

Ann Patchett confronts her stubbornness in a heated argument she once had with her then-boyfriend, now husband, over dinner at the famed Paris restaurant Taillevent. Tom Perrotta explains how his long list of food aversions almost landed him in an East German prison. Gabrielle Hamilton finds that hiring a blind cook leads her into ethical terrain she wasn't prepared to navigate. And poet Billy Collins muses over his relationship with a fish he once ate.

“These enjoyable, insightful, short essays may end too soon, but their memories will linger as if they were your own.” — Christian Science Monitor

“While some of the essays follow a classic Proustian remembrance—a pungent clove of garlic evokes Gary Shteyngart’s escape from the bland boiled dinners of his parents’ home in Little Neck, Queens, and dizzying orange blossom oil stirs up embarrassing moments from Henry Alford’s trip to Morocco—the collection’s wide-ranging essays also include less conventional descriptions of meals, such as Ann Patchett’s elusive word game with her future husband in the Paris restaurant Taillevent. . . . Empty Tang bottles become a powerful signifier in Yiyun Li’s China, and . . . Chef Gabrielle Hamilton faces a profound test of patience with a blind line cook emptying French fries into the drain.” — Publishers Weekly