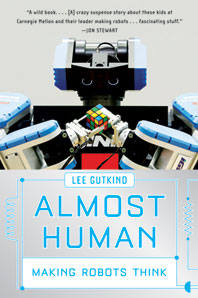 “A crazy suspense story about these kids at Carnegie Mellon and their leader making robots . . . fascinating stuff.” —Jon Stewart

In the High Bay at the Robotics Institute at Carnegie Mellon, Segways scoot across the floor chasing soccer balls while other robots hunt for treasure. Nursebots, developed to care for hospital patients, mingle with a robotic Lara Croft lookalike. Lee Gutkind immersed himself in this frenzied subculture and, in Almost Human, introduces us to Zoë, Groundhog, Grace, and Sandstorm—robots designed to help, or in some cases replace, humans—as well as to the colorful cast of researchers attempting to create language to talk not only to machines but also to one another across their disciplines.

“A fascinating look inside a place where sci-fi dreams are being made real. . . . High tech at its most exhilarating.” — Kirkus Reviews

“A compelling account that reveals how far [roboticists] have come, but how far they have yet to travel to create machines with human sensibilities and gumption.” — David Temple, Pittsburgh Post-Gazette