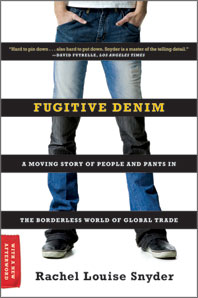 Rachel Louise Snyder reports from the far reaches of the multi-billion-dollar denim industry in search of the people who make your clothes. From a cotton picker in Azerbaijan to a Cambodian seamstress, a denim maker in Italy to a fashion designer in New York, Snyder captures the human, environmental, and political forces at work in a complex and often absurd world. Neither polemic nor prescription, Fugitive Denim captures what it means to work in the twenty-first century.

“Contains a number of surprises about the most ubiquitous of clothes. . . . Ultimately Snyder gets readers to think about the real costs of clothing, and it’s likely they won’t look at $30 or $200 jeans the same way again.” — Kathryn Masterson, Chicago Tribune

“A thoughtful, ultimately hopeful look at how our choices about something as mundane as jeans can alter the lives of people 10,000 miles away.” — Fast Company