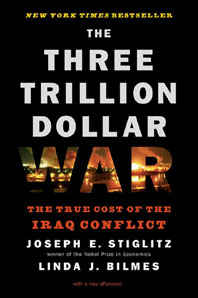 A New York Times Bestseller "This is a catalog [of costs] the Bush team never looked at. It's a catalog that they still don't want you to see."—James Galbraith

America has already spent close to a trillion dollars on the wars in Iraq and Afghanistan, but there are hundreds of billions of bills still due—including staggering costs to take care of the thousands of injured veterans, providing them with disability benefits and health care. In this sobering study, Nobel Prize winner Joseph E. Stiglitz and Harvard University's Linda J. Bilmes reveal a wide range of costs that have been hidden from U.S. taxpayers and left out of the debate about our involvement in Iraq. That involvement, the authors conservatively estimate, will cost us more than $3 trillion.

“Stiglitz and Bilmes have clearly demonstrated the need for Congress and the administration to ensure that those making sacrifices today will see those sacrifices honored in the future.” — Dave W. Gorman, executive director, Disabled American Veterans