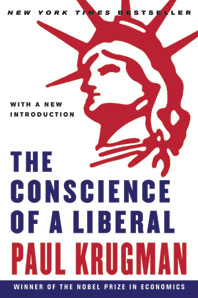 In this "clear, provocative" (Boston Globe) New York Times bestseller, Paul Krugman, today's most widely read economist, examines the past eighty years of American history, from the reforms that tamed the harsh inequality of the Gilded Age and the 1920s to the unraveling of that achievement and the reemergence of immense economic and political inequality since the 1970s. Seeking to understand both what happened to middle-class America and what it will take to achieve a "new New Deal," Krugman has created his finest book to date, a "stimulating manifesto" offering "a compelling historical defense of liberalism and a clarion call for Americans to retake control of their economic destiny" (Publishers Weekly).

"As Democrats seek a rationale not merely for returning to power, but for fundamentally changing—or changing back—the relationship between America's government and its citizens, Mr. Krugman's arguments will prove vital in the months and years ahead." —Peter Beinart, New York Times