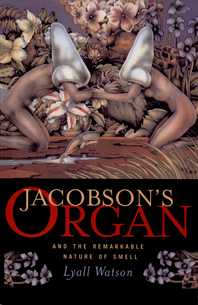 Nothing is more memorable than a smell. So why do we persist in dismissing the nose as a blunt instrument?

Smell is our most seductive and provocative sense, invading every domain of our lives. We can identify our relatives, detect the availability of a potential mate, sniff out danger, and distinguish between good and bad food just with our noses. In this surprising and delightful book, Lyall Watson rescues our most unappreciated sense from obscurity. He brings to light new evidence concerning Jacobson's Organ: an anatomical feature discovered high in the nose in 1811 and dismissed for centuries as a vestigial ghost. Yet recent research has shown Jacobson's Organ to be an incredibly influential pheromonal mechanism that feeds the area of the brain affecting our awareness, emotional states, and sexual behavior.

Following the seven classes of smell devised by the pioneering botanist Carl Linnaeus in his Odores Medicamentorum, Watson examines the roles of smell and pheromones in humans, plants, and animals. He reveals the curious ways in which trees communicate their distress, the olfactory abilities of feral children, the bond we have with our offspring, the psychosexual effects of perfume, and the link between smell and memory formation. Jacobson's Organ unlocks the door to the strange world of this mysterious sense.