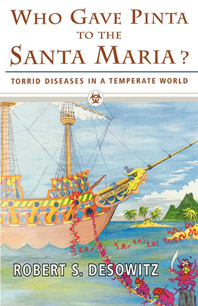 We live in a medical fool's paradise, comforted, believing our sanitized Western world is safe from the microbes and parasites of the tropics. Not so, nor was it ever so.

Past--and present--tell us that tropical diseases are as American as the heart attack; yellow fever lived happily for centuries in Philadelphia. Malaria liked it fine in Washington, not to mention in the Carolinas where it took right over. The Ebola virus stopped off in Baltimore, and the Mexican pig tapeworm has settled comfortably among orthodox Jews in Brooklyn.

This book starts with the little creatures the first American immigrants brought with them on the long walk from Siberia 50,000 years ago. It moves on to all that unwanted baggage that sailed over with the Spanish, French, and the English and killed native Americans in huge numbers in the sixteenth and seventeenth centuries. (The native Americans, it appears, got some revenge by passing syphilis--including Pinta, a feisty strain of syphilis--back to Europe with Columbus's returning sailors.)

Nor have the effects of these diseases on people and economics been fully appreciated. Did slavery last so long because Africans were semi-immune to malaria and yellow fever, while Southern whites of all ranks fell in thousands to those diseases?

In the final chapters, Robert S. Desowitz takes us through the Good Works of the twentieth century, Kid Rockefeller and the Battling Hookworm, and the rearrival of malaria; and he offers a glimpse into the future with a host of "Doomsday bugs" and jet-setting viruses that make life, quite literally, a jungle out there.