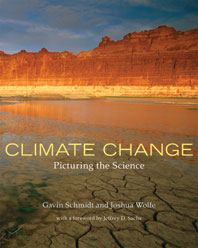 An unprecedented union of scientific analysis and stunning photography illustrating the effects of climate change on the global ecosystem.

Going beyond the headlines, this work by leading NASA climate scientist Gavin Schmidt and master photographer Joshua Wolfe illustrates as never before the ramifications of shifting climate. Photographic spreads show retreating glaciers, sinking villages in Alaska’s tundra, and drying lakes. The text follows adventurous scientists through the ice caps at the poles to the coral reefs of the tropical seas. Marshaling data spanning centuries and continents, the book sparkles with cutting-edge research and visual records, including contributions from experts on atmospheric science, oceanography, paleoclimatology, technology, politics, and the polar regions. As Jeffrey D. Sachs writes in his powerful foreword, “Climate Change is a tour de force of public education.”

“A combination of arresting images and lucid explanations of the science of global warming and the pursuit of global cooperation in adopting new, sustainable ways of living….the coverage is clear and bracing....In the midst of sobering reportage, the authors manage to appeal to our fascination with epic challenges.” — Donna Seaman, Booklist

“[A]n impressive, informative and surprisingly accessible work, leaps and bounds ahead of the half-baked analysis consumers have come to expect from the corporate media…compelling.” — Jason Zasky, Failure Magazine

“[A] masterful account of the science of climate change…It will leave you both in awe of the Earth we inhabit and of the science itself, with all of its uncertainties and incomplete answers.” — Seed Magazine