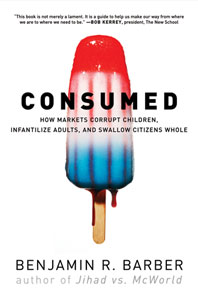 "Powerful and disturbing. No one who cares about the future of our public life can afford to ignore this book." —Jackson Lears

A powerful sequel to Benjamin R. Barber's best-selling Jihad vs. McWorld, Consumed offers a vivid portrait of a global economy that overproduces goods and targets children as consumers in a market where there are never enough shoppers—and where the primary goal is no longer to manufacture goods but needs. Disturbing, provocative, and compelling, this book examines phenomena as seemingly disparate as adolescent fashion trends for adults, megachurches, declining voter participation, the privatization of the public sphere, branding, and the rise of online shopping to show how the freedoms of the free market have undermined the freedoms of the deliberative adult citizen. Barber brings together extensive empirical research with an original theoretical framework for understanding our contemporary predicament.

“Barber delivers a frightening analysis of the way consumerism is vitiating shoppers in the United States and around the world.” — Kirkus Reviews (starred review)

“This lifelong study of the effects of capitalism and privatization reveals a pervasiveness of branding and homogenization from which there is no turning back.” — Booklist

“A remarkable book about the shifting nature of capitalism…Beguiling.” — Financial World