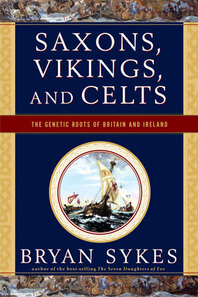 From the best-selling author of The Seven Daughters of Eve, a perfect book for anyone interested in the genetic history of Britain, Ireland, and America.

One of the world's leading geneticists, Bryan Sykes has helped thousands find their ancestry in the British Isles. Saxons, Vikings, and Celts, which resulted from a systematic ten-year DNA survey of more than 10,000 volunteers, traces the true genetic makeup of the British Isles and its descendants, taking readers from the Pontnewydd cave in North Wales to the resting place of the Red Lady of Paviland and the tomb of King Arthur. This illuminating guide provides a much-needed introduction to the genetic history of the people of the British Isles and their descendants throughout the world.

“The science is explained with an infectious zest. His book is so revealing that the new... as well as the old should read it.” — Boyd Tonkin, Independent [England]

“Make[s] a good case for genetics taking its place alongside archaeology and history as a tool for understanding the past.” — Ann Forester, Library Journal