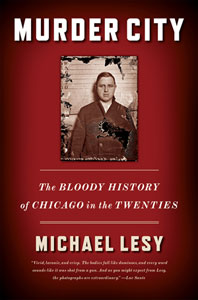 Michael Lesy’s disturbingly satisfying account of Chicago in the 1920s—the epicenter of murder in America—could be fiction, but it’s not.

“Things began as they usually did: Someone shot someone else.” So begins a chapter of this sharp, fearless collection from a master storyteller. Revisiting seventeen Chicago murder cases—including that of Belva and Beulah, two murderesses whose trials inspired the musical Chicago—Michael Lesy captures an extraordinary moment in American history, bringing to life a city where newspapers scrambled to cover the latest mayhem. Just as Lesy’s book Wisconsin Death Trip subverted the accepted notion of the Gay Nineties, so Murder City exposes the tragedy of the Jazz Age and the tortured individuals who may be the progenitors of our modern age.