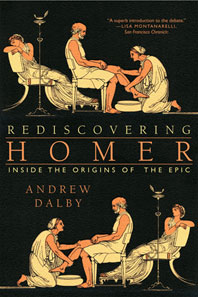 "Dalby's book and his bibliography provide a superb introduction to the debate surrounding these poems."—Lisa Montanarelli, San Francisco Chronicle

Scholar Andrew Dalby delves into the world that first heard the Odyssey and the Iliad, asking new questions about the poet named Homer. Rediscovering Homer follows the growth of the legend of Troy from a kernel of historical truth into an unforgettable story that a succession of singers re-created for generations of audiences. Dalby asks why and how the two great epics crossed the frontier from song to writing while finding new approaches to the personality of Homer and showing how the earliest evidence has been misread. He makes a powerful case that both poems are the work of a single poet, but it is his conclusion that will surprise even serious classical scholars: Homer was most likely a woman.